"I've had a few of Lännen machines" 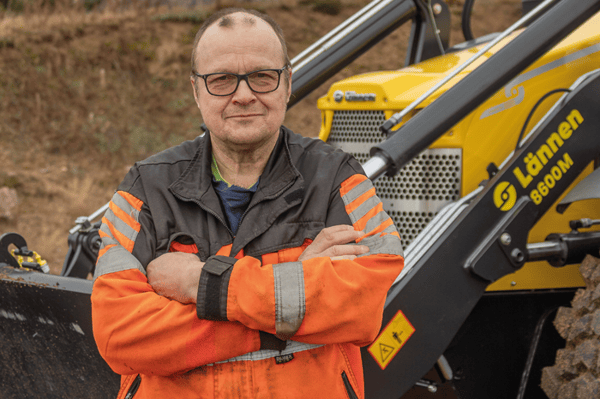 Juha Leisti is one of the first persons in Finland to own a Lännen 8600M series tractor, and although the machine is completely new, the owner has known the brand for a long time. The current multipurpose machine of the Luumäki-based entrepreneur is already the eighth consecutive Lännen machine.

The weathervane on the roof of Luumäki-based entrepreneur Juha Leisti’s home is a rather unorthodox one. The silhouette dancing lively in the wind is that of a Lännen multipurpose machine, with a driver figure greeting from its cockpit. Whereas the weathervane might be eager to change the direction to which it points, the master of the house, Leisti, favours stability – at least that is the behaviour pattern reflected in his brand choices.

– I’ve had a few of these. This Lännen machine is the eighth one, six of them have been folding models and two of them rigid, Leisti counts.

– They were preceded by a James tractor excavator in the late 80s.

Lännen machines are thus not new to Leisti, although the latest shipment in the yard is as fresh as can be: one of the first specimens of the new multifunction machines of the 8600M series to roll out from the Loimaa factory. Handed over in mid-September 2020 and sold by Hannu Siukkola, the machine is a replacement for an 8600K model retiring in excellent condition after having served well for just under three years. 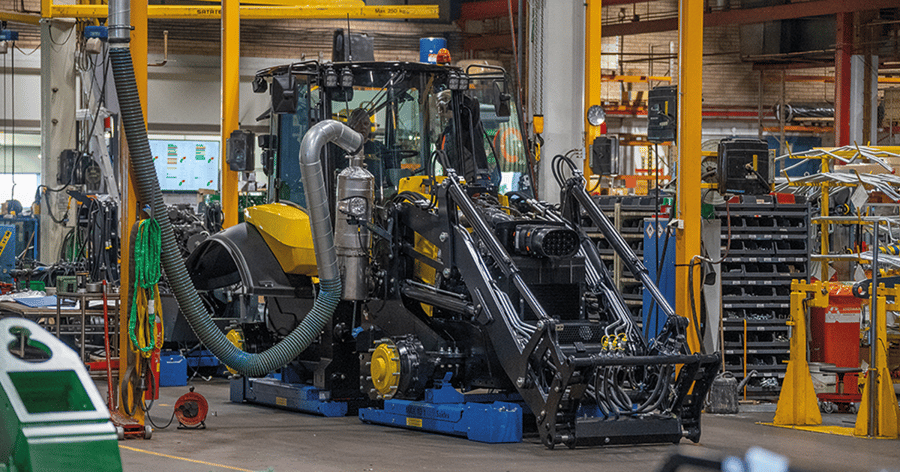 Also the enclosures of the wheel hub motors were painted yellow at the factory at Juha’s request, and although this is not an option to be found in the order form, it was smoothly implemented on the assembly line. Thanks to them, the machine stood out from other M models already on the production line..

Work in the churchyard and in the villages

What kind of work does Leisti perform with his Lännen machines, and how do the machines fit his operations?

– My main employer is the parish, which means everything from gravedigging to landscaping work, he says.

– On top of that, I do infrastructure work, line work, digging, concrete breaking, sweeping, roadside mowing and other similar tasks for the municipality, Leisti continues.

– And there are also various private jobs. The latter tasks may include anything from yard sweeping to the digging of a building’s foundation. The locals have learnt whom to ask if tasks are to be done, so Leisti rarely has to travel beyond the closest villages for work.

8600M is the smallest and most agile model in Lännen’s multipurpose machine range, with service weights starting at 12 tonnes. The size category fits Leisti’s jobs – at least there has been no need for a bigger machine.

– Sometimes I feel like an even smaller machine could be enough, if such ones were available, but the size is suitable for everything I do, Juha Leisti says.

Many of the machine’s features continue proven traditions, but there are also some new features previously unknown to Leisti, such as AOC (Automatic Oscillation Control). This automatic body roll control and management system is not a new thing in Lännen’s product range, but Leisti personally did not have it in his previous machine.

– This time I was convinced to try out the stepless adjustment of tilt rigidity, and it does appear to be a nice feature. The machine with its wide tyres generally feels quite sturdy, he characterises. 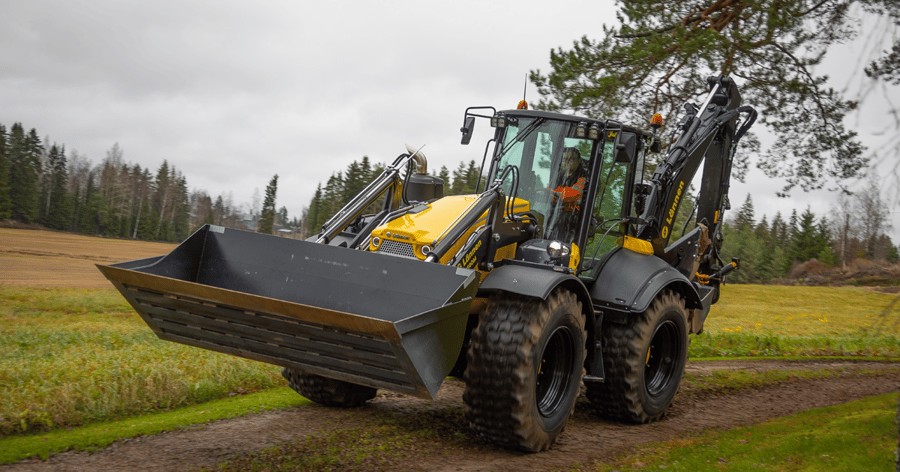 Based on the first feeling, Juha Leisti states that the M-model machine seems even faster.

Satisfying down to the details

The machine’s mobility is good too, and Leisti describes it as brisk compared to the previous machine. The maximum speed is still 46 km/h as before, but Leisti senses a change.

– The axles feel more sensitive, or there must be some other development work behind this, as this machine feels faster than the previous ones, he says.

The machine was also customised at the Loimaa plant according to Leisti’s wishes regarding a few details. For example, the front hydraulic and electricity connectors were located onto the cross beam of the frontloader, allowing easy connection e.g. to a thicket cutter.

Also the enclosures of the wheel hub motors were painted yellow at the factory at Juha’s request, and although this is not an option to be found in the order form, it was smoothly implemented on the assembly line.

The number of lights on the machine is, according to Leisti, sufficient, and visibility from the cockpit has also been improved especially to the digging direction through relocation of the rear window wiper. Regarding the engine, Juha has noticed that fuel consumption has been somewhat reduced, at least based on his first experiences. 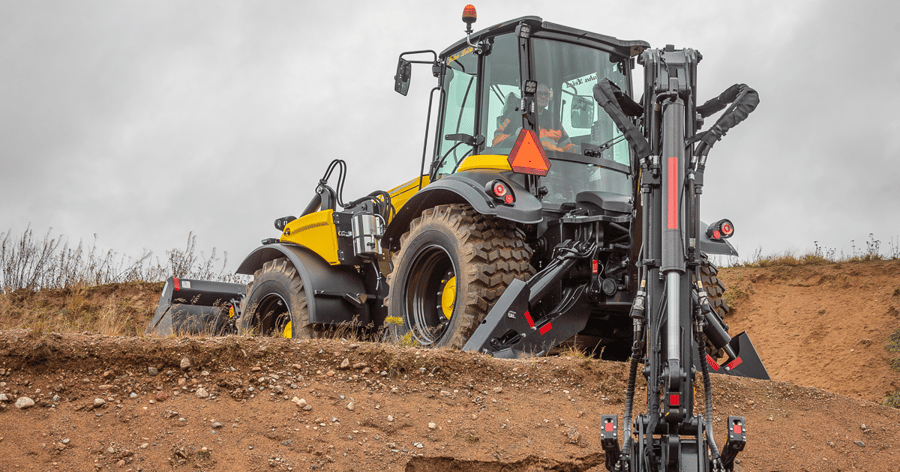 "Infrastructure work, line work, digging, concrete breaking, sweeping, roadside mowing and other similar tasks for the municipality,” Leisti lists the work that have employed him and the Lännen multipurpose machine all year round. 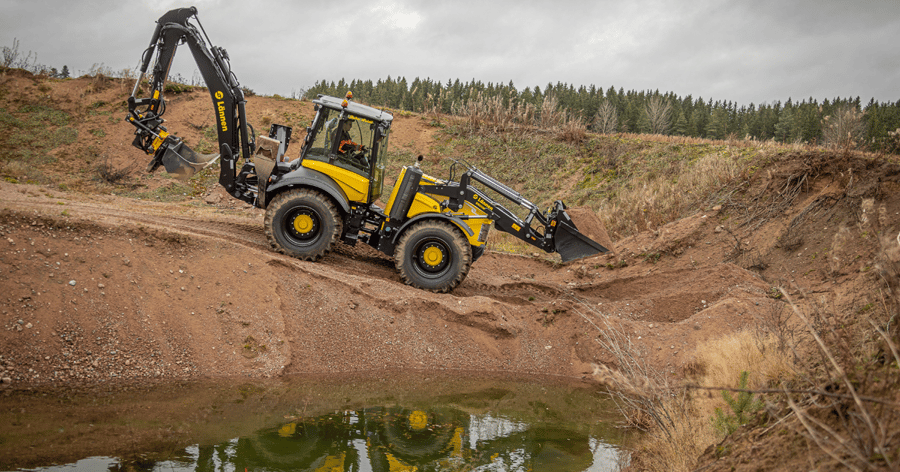 Juha Leisti says that he is satisfied with many things in his machine, such as the stepless adjustment of tilt rigidity. Juha also has noticed that fuel consumption has been reduced, at least based on his first experiences.

Maintenance for this Lännen machine is provided by Leisti’s long-term cooperation partner, repair shop Lavonen in Lappeenranta. Leisti is of the opinion that overall cooperation with both Lännen Tractors and Lavonen has been smooth and reliable. The machines have stayed in working condition, and the reliability is best expressed in Leisti’s faithfulness to the brand.

– I do not really consider other options, he summarises his thoughts. Nevertheless, he reckons that this machine might be his last Lännen tractor.

– Not because I am unhappy with it. I think it just might be time for me to retire after this one, Juha smiles.

– But first I will enjoy this machine for some years. One never knows what the future brings.

”I do not really consider other options.” 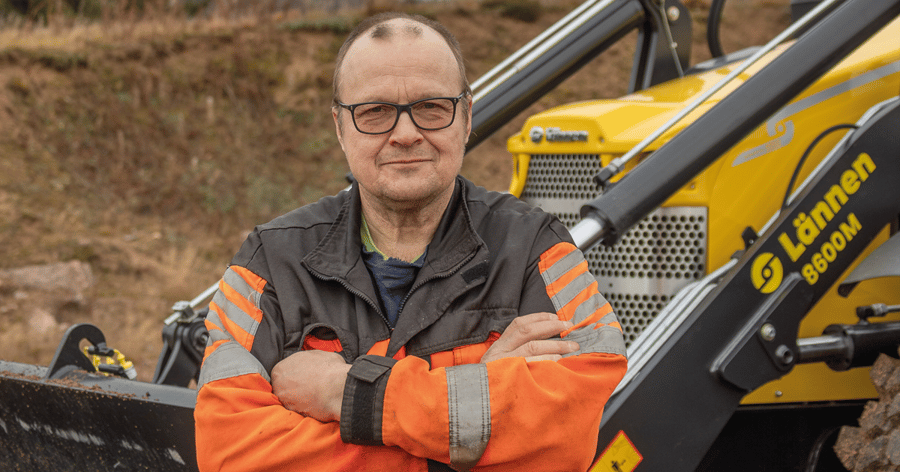 According to Juha Leist, the Lännen machines have remained in good condition and working. The best indication of reliability is that the brand has remained the same for eight consecutive machines.

If you have additional questions, need an offer or want our sales to be in touch with you, then click here.

Taratest Oy, a company specialising in geotechnics and environmental research, has been using Lännen multpurpose machines in its operations already for a...

Max Kvickström started his Lännen career in April 1987 working as an export manager responsible for Lännen backhoe loaders at Syväte Oy and has continued...

Just like the perfect asphalt surface, a successful machine company is built on a strong foundation. Kaivinkonetyöt Hannu Jantunen Oy based in Haapavesi...