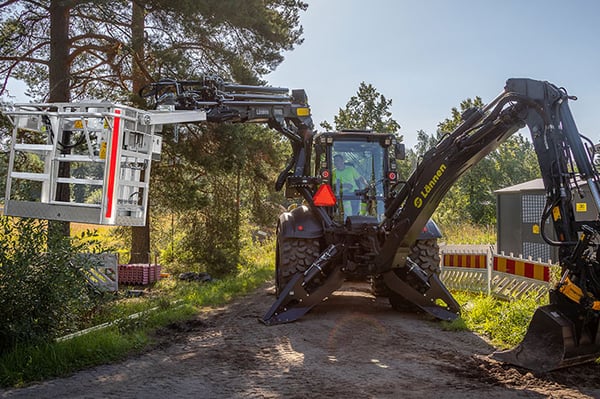 Some decades ago it was perfectly natural for a power company to have its own fleet of machines and qualified staff to operate and drive them. But the world has changed since then, and these days machine work is largely carried out by subcontractors. An exception to this rule is provided by Imatran Seudun Sähkönsiirto, which recently invested in modern, versatile and efficient equipment.

All this was packaged into a single purchase, consisting of a Lännen 8700M multipurpose machine.

A visit to Imatra will bring you to the roots of Finnish power generation, given that the Imatrankoski power plant has been generating energy since 1929. Established a year earlier, Imatran Seudun Sähkö has distributed electricity in the Imatra region and its surrounding areas throughout all these years, and although there is no shortage of choices today, the people in Imatra are rather attached to their hometown company.

Imatran Seudun Sähkö is committed to developing its services and solutions in line with current and future changes, and the construction and maintenance of a distribution service is an integral part of these operations. The branch of the company responsible for this is the parent company’s fully-owned subsidiary in charge of the network, Imatran Seudun Sähkönsiirto Oy.

As is the custom these days, this company has engaged a number of subcontractors for the network construction and maintenance work. But at the same time, it has also always kept part of the operations under its own roof, run by its own employees and machines. It also plans to continue doing so, given that in the summer of 2022, Imatran Seudun Sähkönsiirto updated its fleet of machines in one swoop to a contemporary and future level with a new Lännen 8700M.

The multipurpose machine’s work attachments are also suitable for electricity works. The most important attachments include the Lännen L1900 aerial work platform, but also a pole-erecting bucket, cable plough, grading, cable and digging buckets, and a cable reel.

An entirely new grade of machine

Imatran Seudun Sähkönsiirto employs several of its own lorries in its work, three of which are fit for off-road work.

Five of the vehicles can also be fitted with cranes and elevating platforms. In some tasks, the limits of these machines are nevertheless reached, in terms of both off-road capabilities and versatility.

Before the Lännen machine, the company had been carrying out elevating platform jobs in the field with a tractor-based solution. But by now, the solution has become hopelessly outdated.

- We got the tractor 25 years ago, and its usability and safety are no longer up to today’s standards, says team leader Topi Martikainen.

He adds that, while the price of vehicles fitted with special equipment quickly rose beyond the limits of the investment budget, on the machine side, the purchase would have required two separate machines.

In the end, the Lännen multipurpose machine was the most competitive solution. The deal was made on a machine of the 2020 make, which had been used as a demo machine for some time,” says Martikainen. 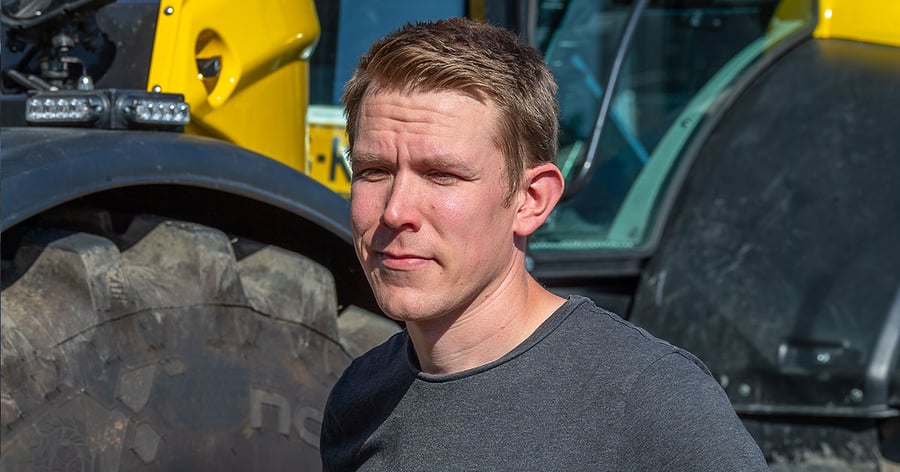 Topi Martikainen, the team leader of Imatran Seudun Sähkönsiirto Oy, says that with the new machine investment, the company wanted to improve further the preparedness for disruptions, i.e. we decided shift to an operating model akin to that of a good old transmission company.

No threat to contractors’ work

Although they now have their own Lännen multipurpose machine, Imatran Seudun Sähkönsiirto is not, under any circumstances, about to abandon its cooperation with contractors.

- It’s not our intention to replace our contractors with this, says Martikainen.

- Given that we needed to renew our fleet in the first place, we combined it with improving our preparedness for disruptions even further. In other words, we decided to shift to an operating model akin to that of a good old transmission company, he adds.

- We intend to use the Lännen machine mainly in fault repairs, clearing storm damage, and reacting to other disruptions, but it’s also suitable for small-scale construction, such as the electricity connections of cottagers. Our contractors’ jobs are usually of a larger scale, and they prefer focusing on them.

The company has already trained its own electricians to operate the Lännen multipurpose machine, and three of the team of 15 are also qualified to drive it. The training has been held at LMCE’s Loimaa factory, but also here in Imatra, in the form of the manufacturer’s usage training and the company’s own safety orientation.

The multipurpose machine’s work attachments are also suitable for electricity works. The most important attachments include the Lännen L1900 aerial work platform, but also a pole-erecting bucket, cable plough, grading, cable and digging buckets, and a cable reel.

- We’re surveying our needs in terms of the attachments and will update them accordingly in the future. But our current range is already fairly extensive, says Martikainen.

- While this machine doesn’t have an installation crane for lifting pole-mounted transformers, we can use it to make a path for an off-road lorry with a crane, he adds.

"We intend to use the Lännen machine mainly in fault repairs, clearing storm damage and in reacting to other disruptions, but it’s also suitable to small-scale construction, such as the electricity connections of cottagers."

Easy to learn, easy to confirm what you’ve learned

The operators’ opinions are important, of course, and today the Lännen machine is being operated by Joonas Sinkkonen. What does he think of the recent investment?

- It’s been a positive experience from the very start, and of course, the work attachments and usability are on an entirely different level compared to the old tractor, says Sinkkonen, adding:

- The off-road capabilities are also excellent. I’ve had the chance to put them to the test from the very first sites this machine’s been on. The optional 100% lock with a rear axle has seen plenty of use already. And the tyres are perfect for off-road work, but still smooth on the road as well.

Sinkkonen also says that the ease with which the machine can be operated is a big plus, because he had virtually no previous experience of this type of machine.

- The induction was good, and the display also gives you a good idea of what’s going on at any given moment. You can also use it to look up details that you can’t remember by heart yet, he says of the clear and illustrative user interface. 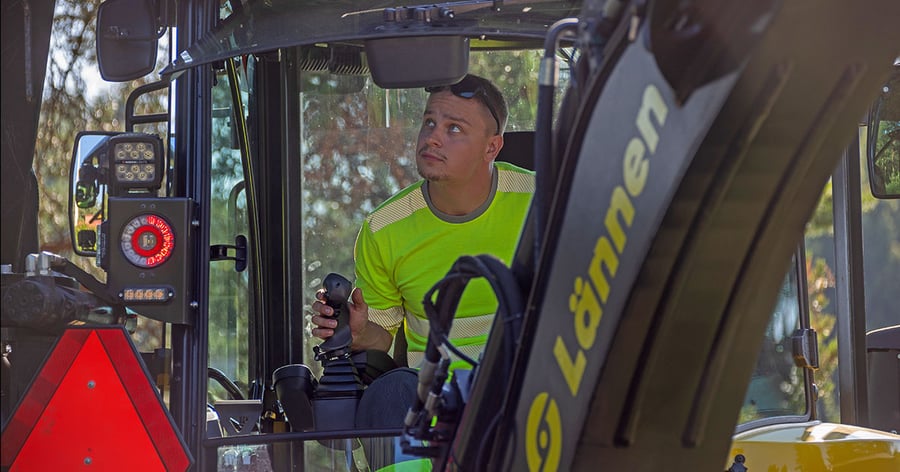 Joonas Sinkkonen, who was driving the Lännen 8700M multipurpose machine at the time of filming, is satisfied with the machine's off-road suitability and usability. Thanks to a good orientation and a clear user interface, the introduction had gone easily, even though he had no previous experience with Lännen multifunction machines.

Towards a growing utilisation rate

So how is Imatran Seudun Sähkönsiirto planning to use the Lännen 8700M in the years to come?

- We have quite a lot of ideas on that because the machine can do so much, says Martikainen.

- The old tractor basically functioned as a simple work platform, but this increases the possibilities a lot. In winter, it can be used in network dismantling work, for example. The utilisation rate is sure to increase, but time will tell how high it’ll be, adds Martikainen.

He believes there is plenty of time for the new Lännen multipurpose machine to show its worth.

- It’ll serve us well for the next 15 years at least, he says before heading off to prepare for a late-summer storm front. If it hits the region, the Lännen multipurpose machine is almost sure to be put to work again.

Imatran Seudun Sähkönsiirto Oy's Lännen 8700M multipurpose machine fits well in Imatra's wonderful landscapes and the machine will be seen in the area all year round in various work tasks.

Lännen 8600M – the multi-skilled machine of a coastal town »

The coastal town of Kotka has relied on Lännen multi-purpose machines for several decades now, and this year reinforced its fleet with yet another new...

Malt barley at the farm and infrastructure projects in town »

Jari Pirjola’s unbroken succession of Lännen multipurpose machines has continued up until his newest M series machine, largely due to their ability to...

The five years for which the Rovaniemi-based Koneyhtymä Mustonen has been in operation have included rapid growth as well as a third Lännen multipurpose...