Lännen 8600K – based on rational arguments 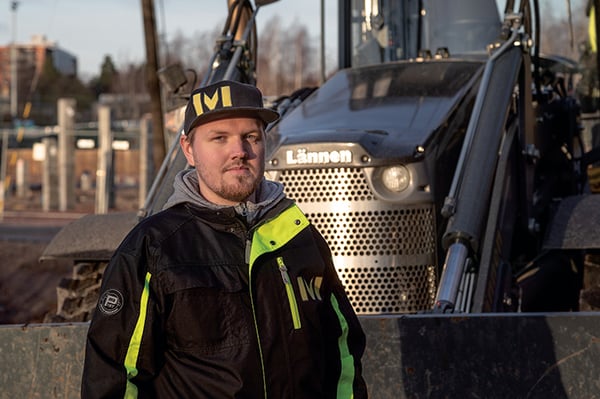 Maanrakennus Markku Vikstedt Oy's new Lännen 8600K is mainly employed within maintenance of streets and related tasks in the City of Espoo, but if need be, it is also readily available for various short-term jobs. This is possible thanks to the versatility and speed of the machine.

Trenching in progress in Matinkylä, Espoo. Originally, the ditch was dug long ago, but open ditches like these need to be dredged open every now and then. The ditch banks will also be cleaned at the same time to prevent the vegetation from taking over in lush places. Maanrakennus Markku Vikstedt Oy is using for the work their Lännen 8600K, delivered early in the year 2019. The machine is the second Lännen multipurpose machine in the history of the company, and the first one bought as new.

Their first Lännen machine, the 8600G model, was purchased second hand. The experience of that machine was so positive that investment in a new machine of same brand was just a matter of course. “We started contract work in the city of Espoo in 2012, and for a very short time we tried to work with a backhoe digger built on a tractor,” says Juho Vikstedt. "Very soon we realised that the machine was not suitable for the purpose, and so we acquired our first Lännen machine" he continues.

One machine, many benefits.

The machine has been virtually fully employed by the city since, and we have come up with new ways to use it during each season. “Mostly we are occupied by excavation of ditches, removal of snow, brushing, washing and mowing” Juho Vikstedt sums up. Naturally, this requires working at varying locations, and since Espoo is by no means a small village, the distance between the work sites can sometimes be long. “The machine's ability to move quickly from one task to the next on its own wheels without using a trailer really saves a lot of time and money,” says Juho Vikstedt. "Its excellent off-road properties are naturally a plus as well, as even the most difficult spots can be reached easily."

Mr Ari Aho, the roadmaster of the city of Espoo, also praises the machine for its versatility. The city has two Lännen machines of its own serving different districts, but the district, for which Mr Aho is in charge, is hiring the machine from Markku Vikstedt Oy. “Thanks to the versatility of the machine, there's plenty of work available for it regardless of the season” says Mr Aho. “From economic point of view, using only one machine is undoubtedly more reasonable. If we had several different types of machines working for us, we would certainly have difficulties finding suitable tasks for them each morning. There are no such difficulties with a multipurpose machine” he continues.

According to Mr Aho, the city of Espoo also values environmental sustainability, and even in this context, the modern versatile Lännen multipurpose machine is an ideal choice. 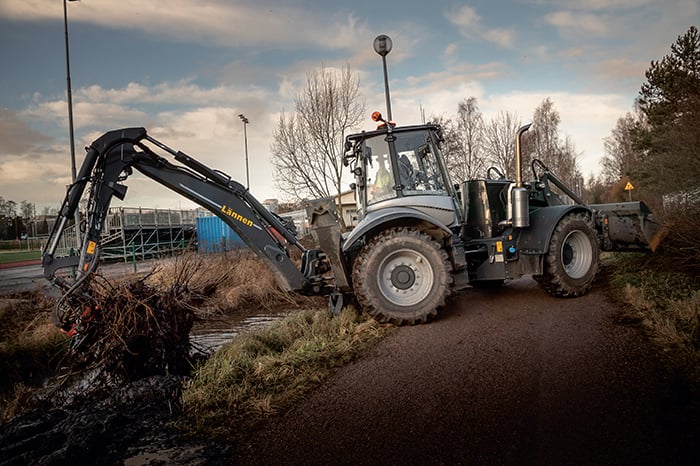 No matter, how versatile the basic machine is, without appropriate work attachments it will not be able to handle all the tasks. And, of course, those tools are expected to work with the machine, without any troubles. “The hydraulic system is working really smoothly and the oil flow produced is sufficient for simultaneous use of a collecting sweeper on the loader arms and a rotary brush on the backhoe. In addition, we have a mower for the machine and we are developing a snow blower, which should be ready by the incoming winter” says Juho.

Of course, the range of attachments also includes a variety of buckets and other more traditional tools. This time, Mr Vikstedt decided to leave out the knuckle boom feature from the backhoe, because more or less similar performance can also be achieved using a Rototilt. 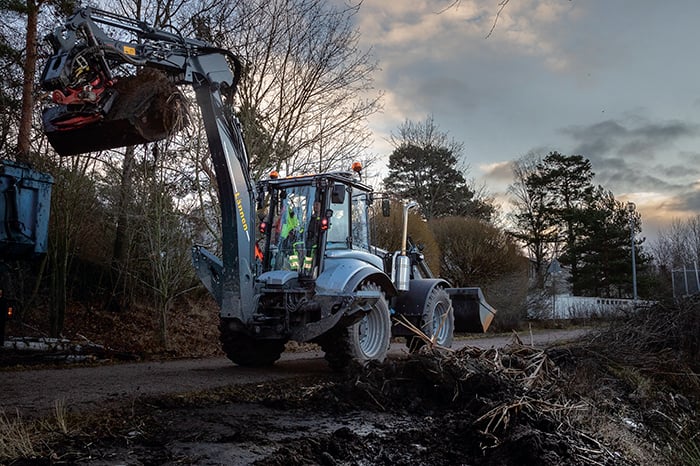 The entrepreneur benefits from efficiency.

How has it felt to switch from one machine generation to the next? As the most important difference between the G and K models, Juho rates the improved ergonomic design, in particular the versatile adjustments of the side-mounted instrument panel and the steering wheel. But after all, his basic message is clear: “as the earlier basic machine was already working so well, we didn't expect much of an improvement. We had used it for 9,000 hours without any major troubles” Mr Vikstedt sums up.

When the city of Espoo sometimes excuses the machine from its duties, we can use it for some short-term assignments for other clients. Such as, for example, construction of private yards and harvesting trees using an energy timber crab. In fact, the machine seems to have ability to attract more work for itself. According to Mr Vikstedt, the city of Espoo also seems to appreciate the versatility of the machine and the many opportunities it offers.

I hope that this business model, which is beneficial to the local residents and to the taxpayers alike, will in the future be reflected in the hourly rate of the machine. Despite the fact that in competition, the versatility has not increased the hourly earnings of the machine, Juho Vikstedt points out that the Lännen multipurpose machine is still a good choice for the entrepreneur: “regardless of the machine type, the orders placed are always the same, but the hourly output of the Lännen machine is higher.”