Lännen 8600M – the multi-skilled machine of a coastal town 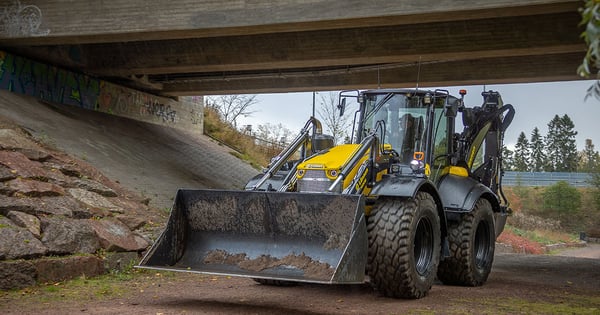 The coastal town of Kotka has relied on Lännen multi-purpose machines for several decades now, and this year reinforced its fleet with yet another new Lännen machine. While the new 8600M reduced the number of machines in the town depot, it also increased satisfaction there.

Kotka may be known for the sea, but naturally, this town of more than 50,000 residents has plenty of solid ground as well, with the attendant infrastructure and constant construction and maintenance needs. At the town depot, this is evident in the wide range of machines. The most recent addition to them, a Lännen 8600M, is waiting for its go-ahead today next to a six-year-old 8600i machine.

The town of Kotka already has a lengthy history of Lännen multipurpose machines, given that its fleet has included several past generations of the machines, and had no less than three of them in service last year. Now that number has narrowed down to two, as the two oldest machines made way for a new 8600M machine.

- We hadn’t actually planned to purchase a new machine just yet, but when our budget unexpectedly allowed for it, we took advantage of the investment opportunity immediately and replaced two of the older machines with a new Lännen machine, says Antti Paasi, a transportation engineer with Kotka’s machine unit.

- We’ve used primarily two of the machines, not that the third would have been idle. But this seemed like the right time to let go of a third machine, adds Paasi.

The new, increasingly efficient, and versatile, machine meant that there was no longer an actual need for a “backup” machine. 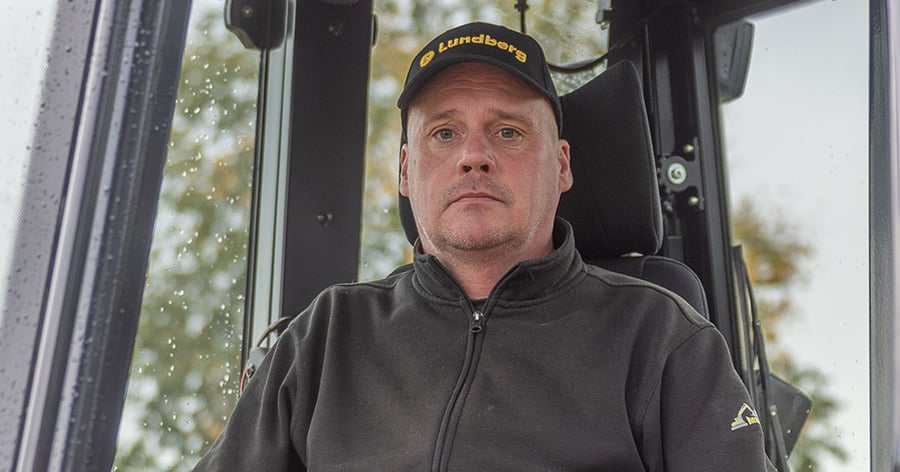 Jari Skippari, the driver of the Lännen multipurpose machine, can do all the work at Lännen, from ploughing, sanding and snow loading to opening drainage outlets for meltwater and digging ditches. Jari also values the drivability of the machine and the promptness of the transmission speed, and he says that he is happy to do an eight-hour workday in the cockpit of such a machine.

Most of the activities in which the Lännen machines engage involve winter – in other words, snow clearing and removal as well as gritting – and when spring draws near, the opening of drainage outlets for meltwater. In late winter, the machines also come more into their own in terms of versatility: there is a genuinely great deal to do from public utility works, from ditching and basic-level earthmoving to the construction and maintenance of Kotka’s award-winning parks. Kotka is indeed a widely recognised town of parks, and the Lännen machines have played a part in this success.

Today, it is Jari Skippari’s turn to operate the machine, and he deftly drives it even in the most confined spaces of the park. The machine’s easy and precise manoeuvrability really comes into its own at sites primarily designed for a peaceful stroll – rather than a machine of this size. It is indeed a joy to watch the Lännen 8600M creep around the well-tended park without damaging a thing, including the carefully managed lawn.

This underscores how a single machine must lend itself to a whole range of different tasks, be it a straightforward excavation that demands brute force and stability or the finalisation of surfaces, or even maintenance carried out in a finished park environment.

- These machines really have developed continuously, and even though the basics have remained unchanged, this new machine still seems easier to operate, says Skippari.

- You’re happy to spend an eight-hour day in it, he adds.

The machine has also been carefully fitted to meet the town's needs and its works. The selected work attachments include new Nokian Ground Kare tyres, Marttiini’s MRT-11 tiltrotator, storage boxes and rubber pads for the outriggers. The new tyres in size 620/60R30 garner praise from Skippari.

- It’s an excellent tyre for driving the machine on streets, and solid in excavation work. There’s no wobble in any direction and the traction seems to hold, too.

Apparently, the tyres also make you brave enough to briefly drive through a just-mowed lawn right in the middle of the park. The wide tyre with a block design distributes the machine’s weight well, causing no damage whatsoever to the lawn. Marttiini’s new rotator model is also a good continuation of the earlier model, found in 8600i machines.

"They aren’t the most inexpensive machines, but if you compare them to some other basic machines, like tractors or full-rotation excavators, a Lännen machine can be used continuously and throughout the year. This provides us with possibilities that other machines do not offer." 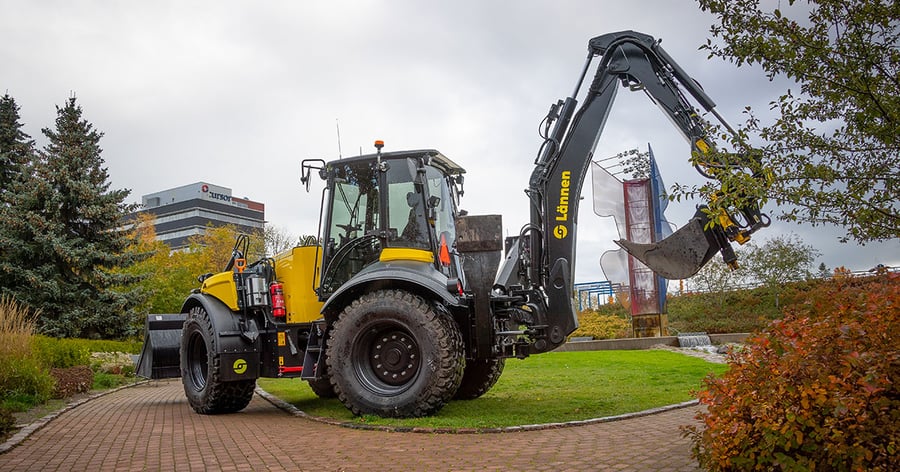 The Lännen machine has also been carefully fitted to meet the town's needs and its works. The selected work attachments include new Nokian Ground Kare tyres, Marttiini’s MRT-11 tiltrotator, storage boxes and rubber pads for the outriggers. The new tyres in size 620/60R30 garner praise from Skippari. Apparently, the tyres also make you brave enough to briefly drive through a just-mowed lawn right in the middle of the park.

The utilisation rate is always high

In traffic, the machine moves at a rapid pace, which is one of its advantages compared to full-rotation machines. Antti Paasi says that the Lännen machine’s work areas cover the entire municipality, particularly in the summer, which is why the speed at which it can be moved from one location to another matter.

- In winter these machines are used closer to the centre of the town, but even then we start from the Karhula neighbourhood, which means that we rack up around 10 kilometres of transport driving alone in each direction, he says.

So what has made the town of Kotka stick with Lännen machines for several decades now?

- I would sum it up as the high utilisation rate resulting from their versatility, says Paasi. They aren’t the most inexpensive machines, but if you compare them to some other basic machines, like tractors or full-rotation excavators, a Lännen machine can be used continuously and throughout the year. This provides us with possibilities that other machines do not offer. 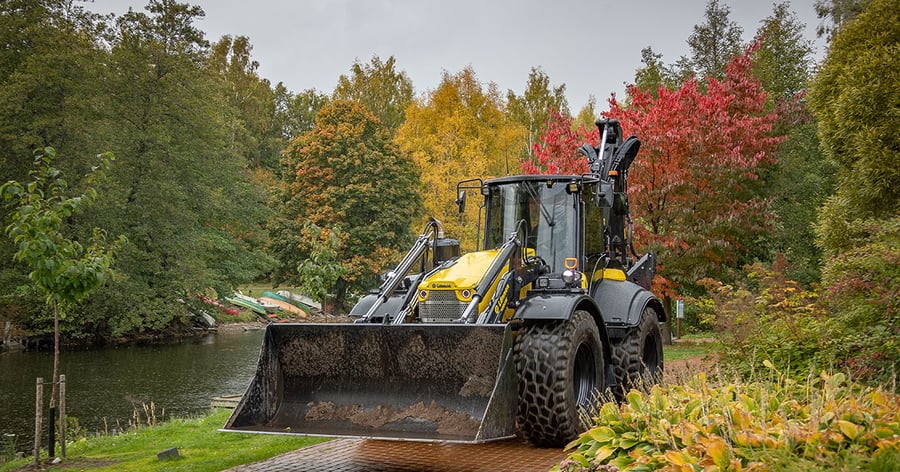 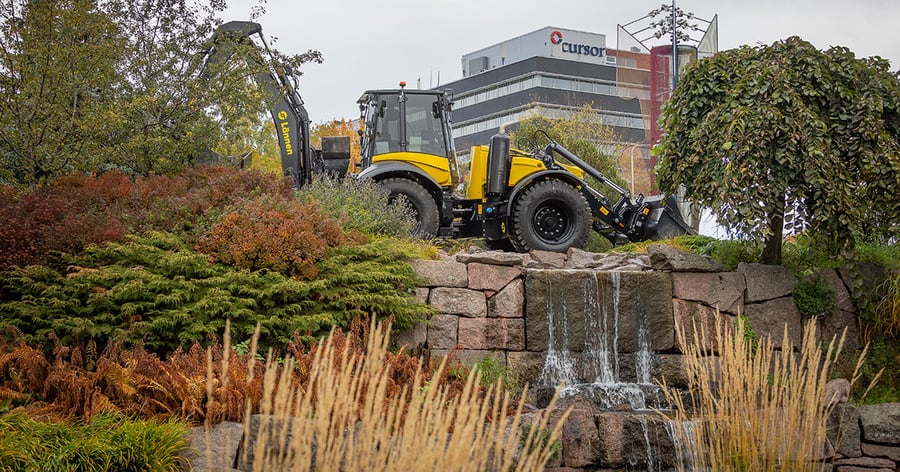 Anlog is an earthworks and transport company with extensive operations in the Turku region in Finland. In the spring of 2022, the company acquired a ...

Lännen multipurpose machines have become increasingly popular in rail use, which is why it is no wonder that the current new rise of the tramways has also...

Some decades ago it was perfectly natural for a power company to have its own fleet of machines and qualified staff to operate and drive them. But the...