An explosion video posted on the Pommijätkät (Bomb Guys) YouTube channel takes hours upon hours of preparation, comprising a variety of tasks from earthmoving to video editing. Obviously, not every part of the production can be handled with a Lännen multipurpose machine, but the team would not be able to make do without one. We visited the Pommijätkät guys on the day they were shooting their Midsummer video.

Midsummer is drawing near and the Pommijätkät crew’s site in the Niinikoski village of Orimattila is alive with the kinds of activity you would expect around that time: you can hear the searing whine of a chainsaw, fresh birches are being brought in from the woods using a Lännen multipurpose machine, rescue services will be arriving shortly, and the boys will soon be blowing up a Midsummer bonfire and firing up the sauna – literally.

What may sound like all fun and games is a working day for the Pommijätkät team and, to be fair, the calendar says that Midsummer’s Eve is still a few weeks away.

Today, the boys are cooperating with the Päijät-Häme Rescue Department on a YouTube episode covering how not to burn a bonfire – and of course how to do it appropriately. Lännen Tractors spent a day at the site observing how the team works its magic.

Pommijätkät crew’s site in the Niinikoski village of Orimattila is alive with the kinds of activity you would expect around that time: you can hear the searing whine of a chainsaw, fresh birches are being brought in from the woods using a Lännen multipurpose machine,

The Pommijätkät channel got started in 2018 when the OneFX company, which had been producing special effects since 2010, decided to harness the power of YouTube to shed light on what goes on behind the scenes.

– At that point, we had been doing gig work for years, providing effects for films, ads, events and so on, says Henkka “Pommihenkka” Kiviniemi.

– We had the idea of recording things like our blasting rehearsals and established the separate Pommijätkät channel for the purpose, he adds.

– Pretty soon it expanded to what it is now, meaning that we generally aim to create educational entertainment – an experimental science workshop, if you will, Henkka says.

– Like Mythbusters but without the myths and a proper budget, says Lauri Vuohensilta, a member of the Pommijätkät crew, who is also known from the Hydraulic Press Channel.

This is the story of Pommijätkät in a nutshell, and the videos themselves say more than a thousand words.

– We have worked on the concept along the way based on viewers’ wishes and requests. The team has also been supplemented with a range of versatile experts, each with their own special skill sets, Henkka describes.

The project of the day is to shoot a bonfire video for Midsummer, so two bonfires have already been set up on the field during the previous day and night: one for blasting and the other for more conventional burning – the latter a sauna-shaped study of Finnish fire-related traditions around Midsummer.

The bonfire to be bombed has been rigged with effect explosives assembled in steel pipes, and the intensity of the flames will be increased with a stook filled with liquefied gas before detonation.

The educational angle of the video is to remind people not to do anything stupid when setting up their own bonfires: petrol and other means of lighting or boosting the fire may lead to a result that is far from charming and idyllic.

Even though the crew is staging the “incorrect” way of doing things, everything behind the scenes needs to go by the book. Putting together effects explosions takes precision as well as a license: a class E license for detonating effects explosives can only be obtained by completing a special course and accumulating at least six months of work experience in the effects field. This is required of everyone, even head blasters.

As such, all explosions featured in Pommijätkät videos have been set up by licensed professionals, which means that, in this context, the well-worn “don’t try this at home” warning is more than a mere formality.

Closing in on the climax

It is almost ten o’clock and the units of the Päijät-Häme Rescue Department arrive from Orimattila exactly as scheduled. The equipment and machines used for preparation are moved to the side so that the actual shoot can begin.

First, some interviews are recorded, since there is more to the video than just fire and explosions. As Kiviniemi said, the aim is to provide the audience with a serving of science and information – this time from the perspective of rescue service professionals.

The work progresses at a good clip, and the moment of detonation is close at hand. In terms of the shoot, these are probably the most critical seconds as the actual blast is over in moments and can rarely be repeated without significant additional effort.

That said, I best take my position and get ready to nail down some shots on my memory card. The countdown ends with an impressive blast, which you will be able to see on the Pommijätkät YouTube Channel. 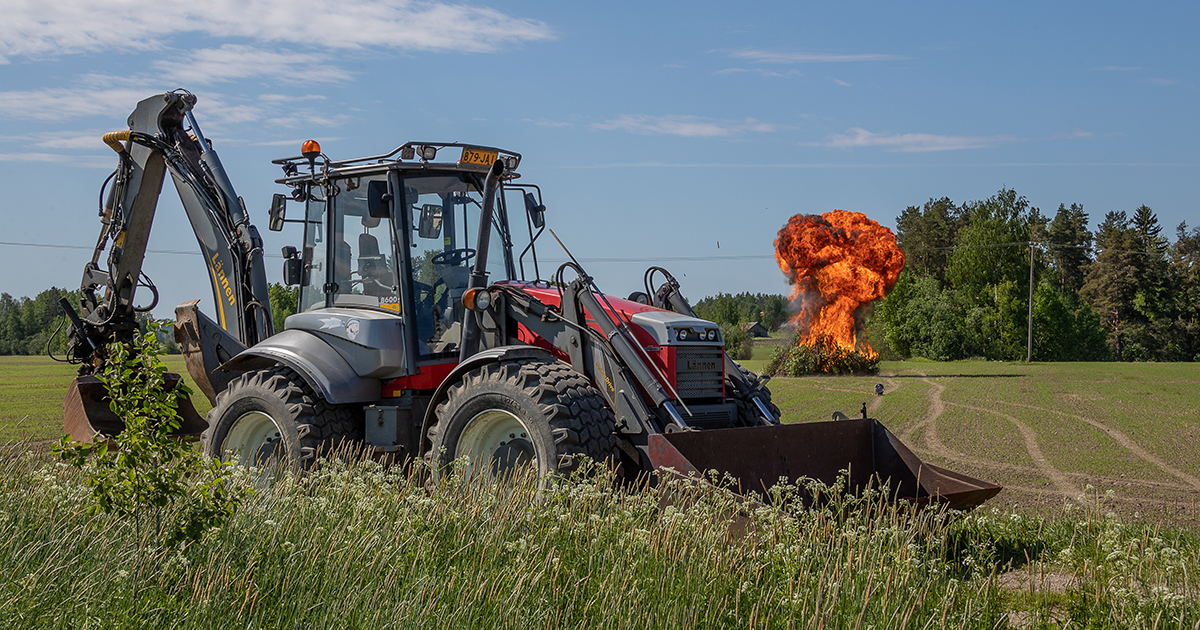 The hay-filled “sauna bonfire” is ceremoniously infused with lighter fluid and set ablaze.

Firing up the sauna!

Then it is time to add some fire to the flames: the hay-filled “sauna bonfire” is ceremoniously infused with lighter fluid and set ablaze. Unsurprisingly, the flames take a very little coaxing. The air is quite appropriately Midsummery and, were someone to pull out an accordion and start playing, you would be hard-pressed to find a more authentic atmosphere.

Soon, the bonfire burns down to a pile of blowing embers, which means it is time to appropriately mop up the fire. Professionals are obviously present, but Joni Akselila from the Pommijätkät team gets an idea.

– Let’s put it out with the Länkkäri tractor. Fill the bucket with water and dump it on the fire.

”We all grew up on farms and are very familiar with all kinds of machinery as a result. Multipurpose machines are in heavy use in our line of work. These are important tools of the trade.”

This proposal does not take long to pass through the appropriate committees, and soon the fire engine of the Orimattila volunteer fire brigade is being used to fill in the tractor’s front bucket.

Doused with a cubic meter of cold water, the remains of the bonfire emit an impressive plume of smoke and ash, providing a fitting end for the sauna episode. The actual shoot is nearing its end but, as was the case with the preparations, the on-site cleanup will take time. And of course, the video material needs to be edited for release before Midsummer.

Pommijätkät cooperated with the Päijät-Häme Rescue Department on a YouTube episode covering how not to burn a bonfire – and of course how to do it appropriately.

Once the bustle of activity begins to die down, there is time to ask the crew about the importance of Lännen multipurpose machines in their production.

– We all grew up on farms and are very familiar with all kinds of machinery as a result. Multipurpose machines are in heavy use in our line of work. These are important tools of the trade, he adds. Joni Akselila and Antti Kunnari agree.

– For example, when we were preparing the bonfires, we noticed that the latest machine has a generator. It was very handy for powering our tools, such as nailguns, in the middle of the field, Kunnari describes. 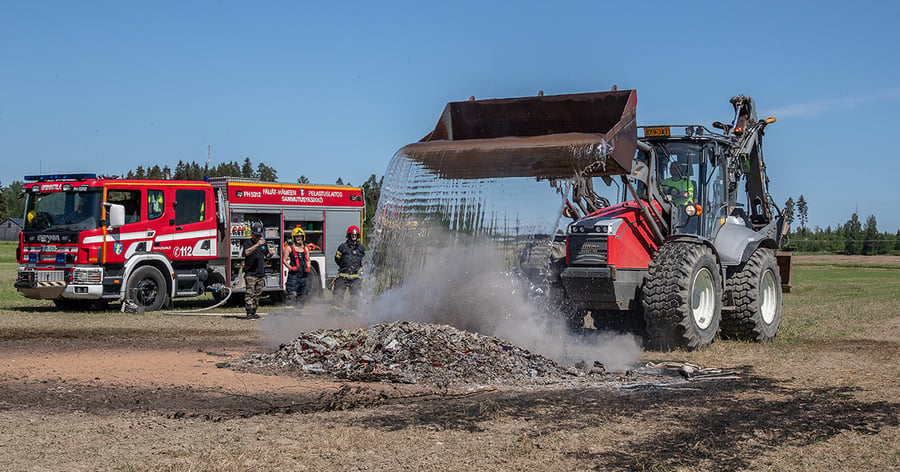 During the filming, the Lännen multipurpose machine played an important role for example, to mop up the fire appropriately.

– Despite its age, it is a fully functional and durable machine, Antti says.

The versatile machines have many roles.

– In our Pommipuisto activity park, we use them for all kinds of things from cleanup to moving cars and preparing blast bunkers, Joni says.

– When we were shooting the car rocket video on the wetlands, the C10, as the lighter machine, took point to clear the path. The bigger one followed its lead, he adds.

– Still, this one did sink in a bit, but we got it out using the rear loader. It worked almost as well as a winch, Henkka says with a laugh.

That is about the extent of the misfortunes that the team has had with the equipment.

– That said, the blasts have taken the C10’s windscreen out multiple times, Lauri Vuohensilta recalls.

Probably because we don’t always move the machine far enough. The shockwave can easily smash the windscreen in, Henkka says, contemplatively. He then continues:

– So we do like Lännen multipurpose machines quite a bit and would be very happy to get one of the latest M-series machines for a test run. I promise we won’t break it – not very badly anyway.