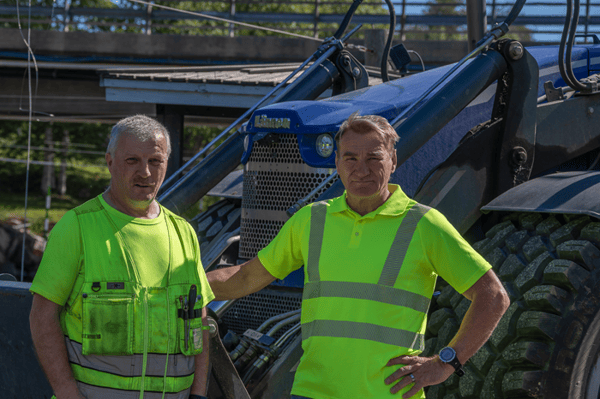 Taivalkoski in Koillismaa is a Finnish municipality that upholds the good old traditions in many ways. One of these traditions is cooperation with Lännen machines, which has lasted nearly four decades. The partnership only grew stronger last year with a new machine acquisition.

In his time, one of the great men of Taivalkoski, author Kalle Päätalo, spoke for hard work, a do-it-yourself ethic and survival, and those that came after him have not forgotten these lessons. This comes clear quickly, when listening to the construction site manager of Taivalkoski municipality, Kari Siikaluoma, and his stories about their new Lännen 8800K, its predecessor 860C and their first Valtra-Lännen tractor backhoe, purchased in 1981, and the roles these machines have had in the municipal worksites.

“This type of machinery has been really important to the municipality. In a small municipality, having this sort of machine means that there is always work to be done with building and maintaining the water and district heating network, maintaining the 35 kilometres of skiing tracks and routes and the parks and outdoor sport facilities, and with snowploughing in the winter of course,” Siikaluoma starts listing and continues, “and there are also nearly 300 kilometres of private roads, and the machine is needed to work on them, too.” 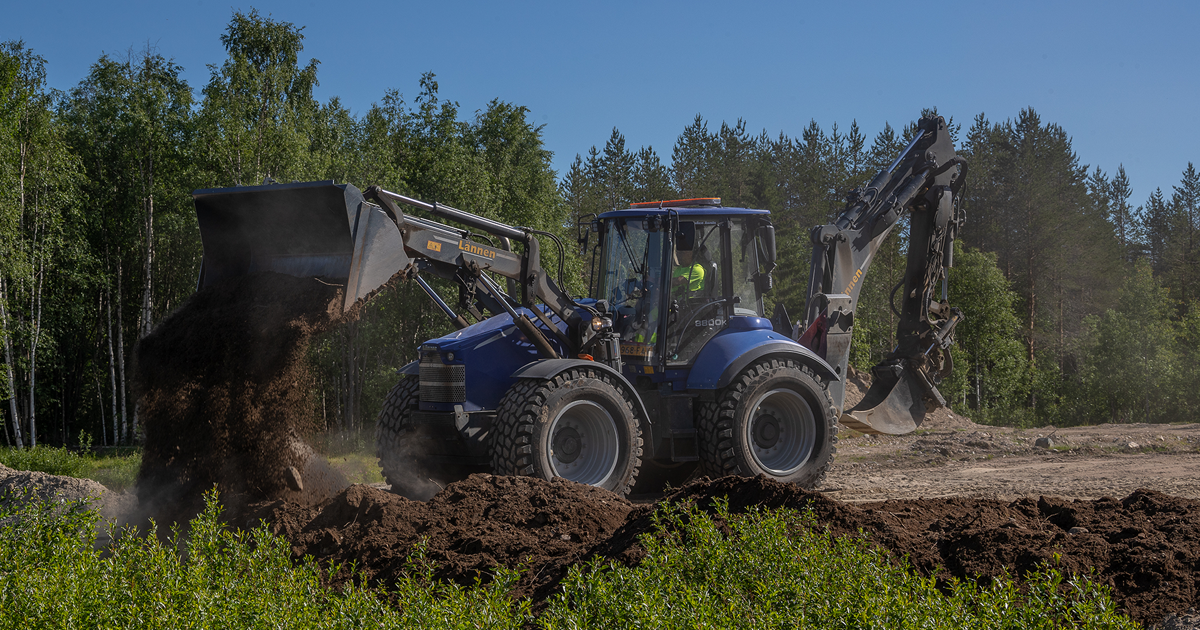 The Lännen multipurpose machine has a central role in the technical operations of Taivalkoski, as it is also the only excavator in town: the other municipal machinery comprises a road tractor and a smaller maintenance tractor. A great deal of responsibility rests on the Lännen machine’s sturdy shoulders, not only in planned works but especially when something surprising happens.

“When the machine is not in use, it’s kept in a warm hall, always ready for action. If a district heating pipe bursts in the winter, for example, we need to be able to get to work right away,” Kari Siikaluoma says.

“Over the years, we have noticed that getting a contractor to come in can be slow sometimes.” However, Siikaluoma points out that they do not try to do everything by themselves. Local entrepreneurs are employed for civil engineering works when necessary. However, a municipal multipurpose machine has been a successful solution, and its value can also be seen in the municipality’s decision-making.

This latest acquisition proves that. “The machine went through a competitive tendering process, and the decision-makers understood the need for this kind of machine, so we were able to procure it,” Kari Siikaluoma summarises. 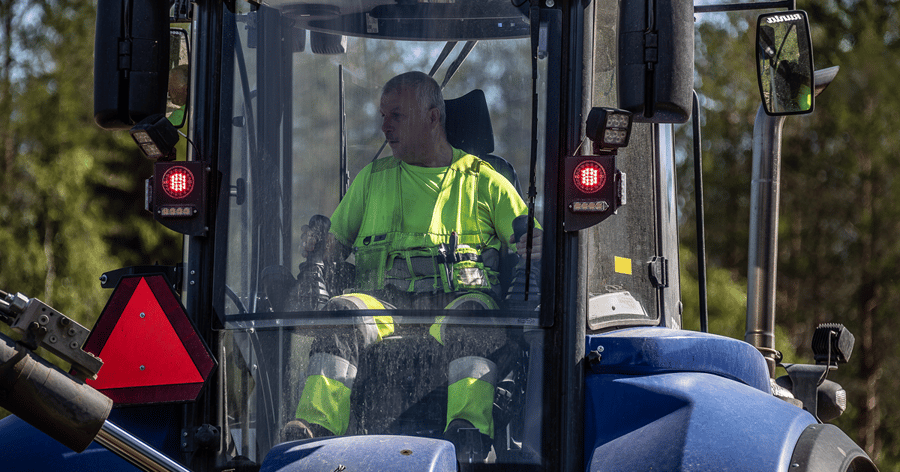 On the interview day Taisto Pitkänen was busy with opening and covering the excavations for a district heating worksite and transporting the soil masses. Pitkänen says that one great aspect is that the machine can be adjusted according to the operator’s preferences.

Investments with a long service life

Kari Siikaluoma says that he was already involved in the first purchase of the Valtra-Lännen tractor backhoe in 1981, and he hasn’t had to shake hands on any such purchases during the following four decades.

“The machines have been durable and powerful. I don’t remember how many hours the first machine logged in, but the 860C that came in 2004 was replaced with this current one when it had about 18,000 working hours behind it,” he says.

Maintenance plays a large role in the machine’s durability, and the Lännen machines at Taivalkoski have been maintained by Konehuolto Mika Jaakola Oy from Liminka.

“The maintenance workers come to us, and everything has gone well. A reliable machine is incredibly important to us because we need to be ready to go 24/7,” Kari says.

The machine’s model was chosen from two options: 8600K and 8800K were both reviewed, but test drives finally helped them choose the larger machine.

“We need plenty of power, especially in the winter, as there is so much snow in the area. That was one benefit of getting a larger machine. And it was a pleasure to plough snow last winter. We only needed to set up the plough and drive, the machine never ran out of power,” Siikaluoma praises.

The Lännen multipurpose machine has a central role in the technical operations of Taivalkoski, as it is also the only excavator in town: the other municipal machinery comprises a road tractor and a smaller maintenance tractor.

You can only get everything out of a multipurpose machine if you have a competent driver, and there are many of them at Taivalkoski.

“The machine has its main operator, and there are others that are able to drive it, too. When there is no work to be done with the machine, every driver has other jobs to do,” Siikaluoma says. And this also goes for today.

Unto Naumanen, the machine’s main operator, can be found at the bottom of a district heating dike, while Taisto Pitkänen is using the machine elsewhere. However, Naumanen is able to take a few moments to share his opinion of the new machine, stating that he has enjoyed working with it.

“The cabin has improved compared to the last model, and the air conditioning is a big plus. I don’t get neck pains any longer, like with the previous cooling system. The large mirrors ensure great visibility and I can see well over the bow, too,” Naumanen says.

“The frame oscillations felt a little strange at first, but I'm used to them. And we have needed the power. There are some steep hills in the area, and we need all the power we can get when climbing on top of them,” he says, describing the machine that has now served them for a year.

“Cooperation with the factory has gone well, they have done a few modifications and updates after the delivery,” Unto says.

“In a small municipality, having this sort of machine means that there is always work to be done with building and maintaining the water and district heating network, maintaining the 35 kilometres of skiing tracks and routes and the parks and outdoor sport facilities, and with snow ploughing in the winter of course.”

Kari Siikaluoma says that he hasn’t had to shake hands on many such as Lännen machine purchases during the following four decades. “The machines have been durable and powerful."

Bigger can be agile, too

Then we move on to see what Taisto Pitkänen is doing. He seems to be busy with opening and covering the excavations for a district heating worksite and transporting the soil masses. In addition to the machine characteristics listed above, Pitkänen says that one great aspect is that the machine can be adjusted according to the operator’s preferences.

“It is easy to see it here, as Unto has his own settings, whereas I prefer the front loader to have a bit more speed, and I can easily change the profile to suit my taste. That’s great.”

He also praises the agility of the machine; even though it is a large unit, there were no collisions even in the winter.

“The machine’s advantage in snow ploughing compared to a tractor is that even though the attachment adds to the machine’s length, it is still able to turn around more agilely,” Pitkänen says and then drives on towards his next worksite. 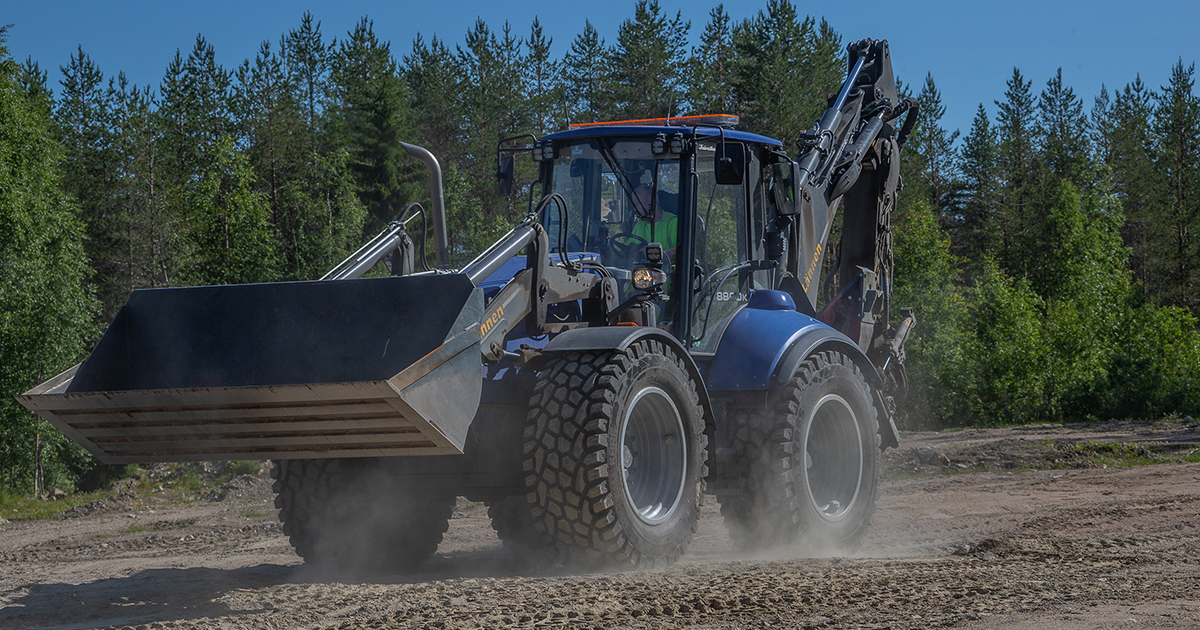 If you have additional questions, need an offer, or want our sales to be in touch with you, then click here.

The five years for which the Rovaniemi-based Koneyhtymä Mustonen has been in operation have included rapid growth as well as a third Lännen multipurpose...

- We are happy to go to the fair with product news for both...